Dark Red with a pink hue

Elaru Wayvin [el-ah-roo wey-win] is the female protagonist of Aethernea novel series. She is a Tracker of unknown origin that possesses Aethernea of Sight - an additional sense that allows her so see mana, though not linked to her eyes, it does have an optical, easily recognizable change to the eyes, which she usually conceals with magic.

The story hints that Elaru is also a Shadow working for the Shadow Lodge. Her Shadow alias is currently unknown, however, it is suspected that she and the Shadow going by the name "Light" are the same person.

Elaru Wayvin's background is shrouded in mystery. Not much is known about her early life. In episode 16, when she was seven years old, she saved two non-mages with her life at risk. The identity of the two non-mages she saved was unknown. She also promised Wade Wayvin to never leave each other. She stated that the last time she slept with Wade and her father was three years ago.

Not much is known about her dad but Elaru recalls her dad putting her and Wade through bizarre situations as a part of a training.

She has long carmine red hair reaching up to her waist that she keeps tied up in a high ponytail most of the time. Her skin is tan and her lips are full and naturally red. She has black elibu markings on the left side of her face, extending down the left side of her neck to her shoulder and arm. Her eyes are fluid and animated with little dots and stripes moving in an endless repeating cycle.

Normally, she is cheerful, easy going, and appears reckless. However, in reality, her actions though appearing reckless are actually carefully planned. She is shown to be eloquent and able to twist the truth to manipulate people without telling lies. She often disregards societal norms and what other people think, acting only on her own beliefs. Elaru seems not to fear death and doesn't hesitate to stake her own life to save others, even if those others are complete strangers.

Elaru likes challenges and battles, because then she feels the most alive. She believes that without enemies and rivals, life would be boring.

Elaru is very smart, observant and calculative. She is able to see through people to their true nature. Most of the time it seems that Elaru's emotional intelligence is also very high, but at other times, especially when it concerns love, she appears to be clueless. It is highly likely that Elaru is acting dense out of convenience to avoid awkward situations and make it easier to avoid anything related to love and relationships.

Elaru is shown to be gentle, kind and considerate at times, but at other times she loves teasing people and making the scene more lively. 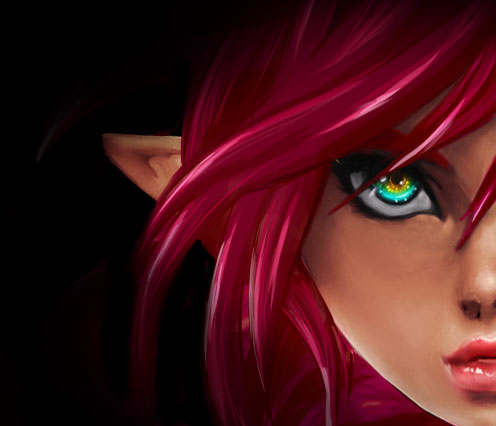 Elaru Wayvin and Kiel Rroda were engaged in an intense battle in Zerean ruins with a mage. Unlike Kiel, she hardly have enough scratch on her despite the few scratches on her clothes. When Kiel destroyed the mana crystals that powered the daggers, she charged toward her opponent straight-on because the density of her mana weakened the daggers that targeted her. Before she could strike a move on her opponent, Kiel used his new move that collapsed the ancient ground of the ruins.

How It All Began Arc[]

For the past few days, Elaru had been spying on Kiel. She sat on the highest pillar of the canyon at the same spot from dawn to dusk. When she found Kiel approaching him, she smiled and wondered what he was trying to do when he approaches her. She decided to make the first move and approach him silently with her mana concealed. When she called to his attention, she offered to help Kiel to become a student of Muni and a first class-mage. Kiel asked her how did she came to the conclusion that he needed her help. She pointed how he was born into the Rroda Family and how strange it was for him to not apply for Muni despite his thirst for the knowledge of magic. Kiel denied her and she then pointed how he truly was on the inside.

She even found out that Kiel only had little mana for him to become a sufficient mage. Kiel quickly ran away from her afterward. While he ran, Elaru simply just waited until he stopped running in circles and then quickly caught up to him by seeing his mana with her divine sight. She healed his tired body and explained how amazing Kiel's skills are as a mage and how lucky he born into a mage family that he was able to develop the skills he had. They then said goodbye to each other and agreed to meet each other again the next day.

Elaru was waiting for Kiel and was concerned of the thought of him not coming. She was glad for him to show up and shaped the earth into two earth stools for them to sit as they converse. Before Kiel started questioning her, she voluntarily signed an Oath of Truth to herself that disabling her to lie. She barely revealed anything about her despite the fact she could not lie. The only she revealed was that she not under any family banners and she was a quest seeker that do legal quests according to her. She also told Kiel about her Aethernea of Sight could be able to locate someone's mana.

Kiel pointed that Elaru is a tracker with her divine sight and she did admit that she spent a lot of time tracking down artifacts. She told Kiel the secret behind the markings of an elibu that was the trigger for the ancient oath, Aetherneal Bond. She obtained the information from the Arite Family that was casting the trigger for their own purpose. If anyone else knew they possess such knowledge, it will mean death for those who know the Aetherneal Bond. She explained the effects of the bond. She believed her encounter with Kiel was not luck but destiny. 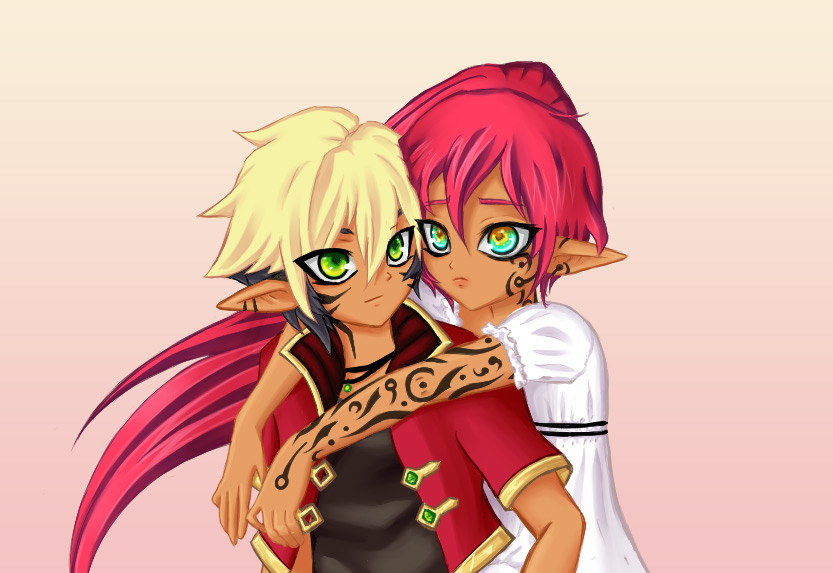 Elaru and Wade are distant cousins, however, they grew up together so they are very close to the point of being closer than siblings.They even promised each other to never leave each other's side.

Not much is known about her father but Elaru looked up to her father with admiration and love. She even call her father "papa."

Kiel is her Aethernea Bond's soulmate. She considers him one of the most important people in her life falling in the same rank as a close family member. She likes Kiel for who he is, accepting both his good and bad sides. She seems to like teasing Kiel and acts oblivious to all romantic innuendo. However, behind the scenes she does everything she can to help him without his knowledge.

She finds Kiel similar to herself on some level, and to Wade on another.

Elaru Wayvin is considered a very talented and strong mage. She is also in the possession of the Aethernea of Sight.

Community content is available under CC-BY-SA unless otherwise noted.
Advertisement